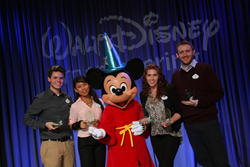 The student team from Ringling College of Art and Design were announced as the first place winners of the 24th Walt Disney Imagineering Imaginations design competition during an awards luncheon at Imagineering headquarters in Glendale, California on Friday, January 30th. Imaginations is a design competition created and sponsored by Walt Disney Imagineering with the purpose of seeking out and nurturing the next generation of diverse Imagineers. Started in 1992, the program has grown to include a separate version sponsored by the Hong Kong Disneyland