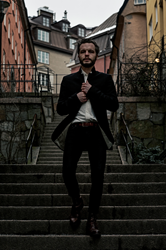 Valentines weekend at the multiplex will be Grey vs. Clay. Exploitation vs. innocence. Unusual behavior (why the MPAAs rated Fifty Shades R) vs. thoughtful behavior. And a new trailer from OLD FASHIONED, aimed squarely at Fifty Shades of Grey, hopes to influence the outcome.

This Valentines Day, says the trailer, leave the door open to two souls who take the time to discover not manipulation but healing. Sexy corporate mogul appears onscreen and a red line strikes through the words. Scenes then contrast the opposing stories: fantasy wealth and a contract to inflict pain . . . or two down-to-earth, relatable people with failed romances, now finding their way to real love.

It surprises me, honestlyin a culture claiming to advance female independence and equalitythat so few powerful voices raise questions about Fifty Shades, Nathan Nazario, producer of OLD FASHIONED said. Behind the rating euphemism unusual lies a crippling cultural fear or unwillingness to say any act is potentially harmful.

Rik Swartzwelder, OLD FASHIONED writer, director, and lead actor (playing Clay Walsh) questions Fifty Shades long-term effects. What happens when harmless fantasy plays out in the real worldin young lives unsure of what lasting love looks like, much less how to get it? he asks. Unquestionably, the stories our culture lifts up influence young audiences.

Its not about boycotting or creative restrictions, Swartzwelder added. Audiences merely deserve a choice, an alternative view of love and romancesomething more than objectification.

Swartzwelders script sprang from conversations with fellow singles, he says, struggling to pursue God-honoring and long-term love in a world fixed on short-term pleasure. For Swartzwelder, Valentines Day weekend comes down to a question. In your heart, he asks, what do you want to believe about true love?

In other news, Pure Flix, the studio behind the GODS NOT DEAD blockbuster, acquired OLD FASHIONED home entertainment rights. We partner with movies that stand for more than the latest bestseller, David A.R. White, Pure Flix Entertainment co-founder said. OLD FASHIONED can expect strong interest because it taps into a universal human longing.

The OLD FASHIONED soundtrack, facing a February 10 release, comes via Milan Records, a label distributed through Warner Music Group. The album features titles by Roz Bell (Feel Like Home), Josh Schicker (No Place Like You), Fred Haring (Aint Where I Used to Be), Scott Krippayne (While The Days Are Young) and many more. Kazimir Boyles original score, a blend of minimal and orchestral pieces, accompanies the characters journey of discovery.

Skoche Films is an independent motion picture development company dedicated to crafting cinematic narratives that entertain, challenge and inspire. For additional information on Skoche Films and its properties, please visit the official website at http://www.skochefilms.com.

Freestyle Releasing is a full service, theatrical, motion picture distribution company that helps independent companies, major studios and mini-major studios exhibit their films in first-class theatrical releases. The founders and principals of Freestyle Releasing, Mark Borde and Susan Jackson, are motion-picture industry veterans. The Freestyle platform is an anytime-anywhere capability in the viewers choice of medium, a positive digital viewing experience on any device in any location. http://www.freestylereleasing.com

Pure Flix, based in Scottsdale, AZ, is the largest inspirational film studio in the world and has produced, acquired, marketed, and distributed nearly 100 faith and family-friendly properties. With a mission to transform culture through values-based entertainment, Pure Flix is an industry leader in creating high quality inspirational feature film content. http://www.pureflix.com

Whether youre enjoying home cinema, or seeking to catch every detail of your favourite music, digital wireless sets your entertainment free letting you immerse yourself in sound, said Oliver Berg, Product Manager at Sennheiser electronic. As the leader in the digital wireless headphone market, we are taking this vision even further with our new RS range. Combining state-of-the-art wireless technology with our expertise in high-performance wireless audio, the headphones deliver authentic sound at the highest ranges. With great design and supreme comfort, they create a personal experience to treasure.

Sennheisers new proprietary wireless link technology delivers class-leading performance for wireless headphones: Operating on the 2.4 GHz band, it offers highly reliable connectivity with low latency and excellent range – with the RS 165 offering up to a 30 meters range and the RS 175, RS 185 and RS 195 letting users enjoy their entertainment at up to 100 meters from the transmitter.

Through everyday life and also todays technology-rich environment, our homes are ever more noisy in every sense. Using advanced digital wireless audio transmission technology ensures we can deliver high-quality sound for a great personal experience while, behind the scenes, efficient management of bandwidth ensures effortless co-existence with existing radio equipment in your home, for best interference-free listening, said Oliver Berg.

Each new model offers a distinct sound experience to address different needs and tastes: The RS 165 provides a vibrant listening experience with optional bass boost. The RS 175 offers even greater involvement in the home entertainment experience, with its choice of virtual surround sound modes and switchable dynamic bass.

Delivering a rich yet balanced sound for the ultimate listening experience, the RS 185 which, unlike the other new models features an open design provides incredibly detailed, uncompressed sound for optimal wire-free HiFi-listening. It also offers a manual input level control for perfectly tailored unaltered sound.

With the RS 195, Sennheiser has expanded its wireless range to provide a high performing solution that can also help address specific personal hearing needs. Dedicated pre-sets and modes can increase speech intelligibility and tailor the sound to the users preferences to enhance the listening experience, whether watching TV or listening to music. The new headphones offer optional digital optical inputs available on the RS 175, RS 185 and RS 195.

Sculpted in clean, elegant lines, the headphones and transmitters with charging function share a discrete, premium aesthetic that aligns form and function.

All headphones in the range feature plug-and-play setup, simple intuitive controls, and easy charging for up to 18 hours of listening. An around-ear design provides excellent levels of comfort for even long periods of use, making them the perfect companion to home audio video systems.

The new RS digital wireless headphones will be available starting from January.

The Sennheiser Group based in Wedemark near Hanover, Germany, was founded in 1945 and has gone on to become a leading manufacturer of microphones, headphones and wireless transmission systems. Sales in 2013 totaled 590.4 million euros. Sennheiser employs more than 2,500 staff worldwide and operates plants in Germany, Ireland and the USA. The company has a worldwide network of subsidiaries in France, Great Britain, Belgium, the Netherlands, Switzerland and Liechtenstein, Germany, Denmark (Nordic), Russia, Hongkong, India, Singapore, Japan, China, Australia and New Zealand, Canada, Mexico, and the USA. It also has long-established trading partners in other countries. Georg Neumann GmbH, Berlin, a maker of studio microphones and monitor speakers, and Sennheiser Communications A/S, a joint venture making headsets for PCs, offices and call centers, are also part of the Sennheiser Group.

More information about Sennheiser is available on the internet at http://www.sennheiser.com

All BeeWi accessories use wireless Bluetooth technology, Low Energy (Bluetooth Smart). This technology couples an improved management of the power consumption of the devices with an operating distance from 30 to 50 meters.

These products will be available during 2015 first quarter, and will be the most important range of connected lamps on the market.

This plug allows to switch on, off and to program any electric device plugged to it, thanks to SmartPad, set on your smartphone or your tablet. The uses of this technology are numerous : electric heaters, TV sets, lamps ; everything can be controlled through this small box. This plug can also give the electric consumption of a connected device, whenever you want.

This product will be available on the 2nd quarter of 2015

In order to connect all these products, the communication gateways Smart Master Ethernet and Smart Master Mobile offer a remote access to all these devices from the same web interface.

Using BeeWi SmartPad WEB, you can get informations about your home, program and control the different BeeWi accessories already set in real time- whether you are working, or on holidays or just far from home.

This small box can easily be set on any ADSL routeur, just by connecting it to an available Ethernet port and on a USB port (for power). Once connected, the user will be able to remotely control the accessories set at home via BeeWi SmartPad WEB.

BBG200 automatically sets a Bluetooth connection with the different accessories in the house.

This product will be available during 2015 first quarter.

This plug, looking like the Smart Plug, is equipped with temperature and motion sensors, and a Bluetooth Low Energy module, a battery but also a GPRS module for remote control (SIM card included)

In addition to its gateway function (like BBG200), BMG200 can be used alone, as a small alarm and home automation central. The available functions are :

Proceeds from iTunes sales of acclaimed singer-songwriter Kiff’s single “Coming Home,” about loved ones far away, will go to non-profit group Cellphones for Soldiers to help our troops call home this Christmas and into the New Year.

“You can imagine how much it must mean for these soldiers and their families just to hear ‘I love you’ from 7,000 miles away,” said Kiff. “It’s especially important now as they are facing uncertain times at home as well as abroad.”

In addition, Kiff will be setting up drop boxes in San Francisco and Los Angeles for those who wish to donate their old cell phones to this very worthy cause. The phones (not usable in Iraq) are refurbished, sold and intensely-in-demand calling cards are sent directly to troops. More info and the song “Coming Home” can be found at http://www.kiff.com and http://www.myspace.com/kiffmusic.

Kiff has reason to spread good cheer this holiday season. He’s been selling out shows on both coasts, winning media raves for his latest album “You Can’t Keep It Down” and was recently invited to perform at the San Francisco chapter’s annual GRAMMY